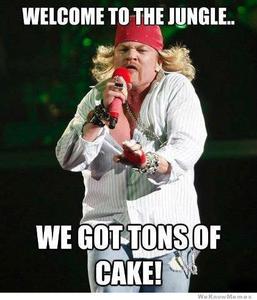 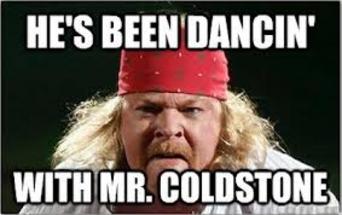 The only thing more fucktrociously, window-lickingly idiotic than Axl Rose trying to scrub the Interwebs free of all the "Fat Axl" memes . . . like these . . .

is the video game-inspired shitacular, Warcraft.

Warcraft is based on the MMORPG World of Warcraft.  If you don't know that MMORPG stands for "massively multiplayer online role-playing game," congratulations!  You not only have a life but maybe even a chance, infinitesimal as it may be, of getting laid.

With a $160M budget and more than a decade of development, you'd think that Warcraft would boast some crazy-ass-awesome special effects and an epic story, right?  Joke's on you, Douchegalf the Netherfresh, because Warcraft has the Velveeta cheesy look and noggin'-scratchin' "What the fuck am I watching?" plot of a third rate Syfy channel throwaway.

The evil wizard ruler of the not-so-jolly-green-giant orcs, Gul'dan (Daniel "Cindy Lou" Wu), leads an invasion of Earth stand-in Azeroth.  Gul'dan is such a tool that even one of his own generals, Durotan (Toby "Tobi Tobe" Kebbell), thinks maybe the whole invasion thing isn't the best use of orc resources.

Led by poor man's Aragorn, Lothar (Travis "Dimmy" Fimmel), the humans and a half orc-half human outcast, Garona (Paula "Dick Van" Patton), try to figure out how not to get their skulls bashed in by the green meanies.

Well, mostly green.  Some orcs, like Durotan, are whatever the orc equivalent of White is.  The rest of the orcs - you know, the ones who are bloodthirsty savages - are green, I.E. darker colored.  Making Warcraft the most racist bit o' filmmaking since Goodbye Uncle Tom.

When it's not setting race relations back 50 years, Warcraft doesn't even try to hide all the stuff it stole from way better movies.  Within the first five minutes, there's a "boomstick" shout out to Army of Darkness.  The orcs are so Klingon that they talk about "honor" until you want to punch one in its fanged underbite.  Straight outta Harry Potter, one character's forearm tattoo glows when he's about to stumble onto an important relic.

There are musical cues ripped note-for-note from Star Wars.  They only changed one fucking letter between Guardians of the Galaxy's sexy, green warrior babe, Gamora, and Warcraft's version, Garona.  They nicked the Moses-in-the-bulrushes story from the Bible.  And beyond the orcs, dwarves and elves, Warcraft pilfered the absolute worst part of The Lord of the Rings movies, the 28 fucking endings.

Awfulest of all, because of the money it's raking in at the international box office, Warcraft will probably get the sequel it's so painfully obviously setting itself up for.

Thanks China.  You assholes.