In the words of the immortal Ron Swanson:

You hear that Universal, you greedy-ass shit mongers?  After watching billions upon billions of dollars roll into Marvel's and DC's Swiss bank accounts thanks to their Avengers and Justice League mega-crossover-franchises, no one blames you for wanting to kickstart your own classic monsters-based version.  But if you're going to half ass it like you did with The Mummy then Universal's "Dark Universe" is destined to be the Arby's to the McDonald's and Burger King that are the MCU and DCEU.

Maybe quarter-assed better describes your efforts on The Mummy?  The movie is really only half about the Mummy.  The other half is circle jerk world building for future Dracula, Frankenstein, Creature from the Black Lagoon and Invisible Man flicks.  I'm no mathologist, but I'd say the numbers work out.

For fuck's sake, how do you spend $50M on special effects and not bother to CGI the wrinkles out of the flesh-colored bodysuit Sofia "Big" Boutella wears under the tattered bandages of her sexy Mummy costume?!

Nick Morton (Tom "Thumb" Cruise) and Chris Vail (Jake "New Girl Guy" Johnson) are U.S. soldiers who spend their deployment tomb raiding.  Because that's what soldiers do, right?  They unearth a mummy named Ahmanet whose submerged prison was built with counterweights that make releasing her as easy as cutting one rope.  Stupid Egyptians.  Ahmanet curses the two cut rate Indiana Joneses, and that's pretty much the mummy part of The Mummy.

As Nick and Chris try to get un-cursed, they run into - no shit neither - Dr. Jekyll/Mr. Hyde ("You Know Nothing" Russell Crowe), the leader of a shadowy evil-eradication syndicate.  That's the rest of The Mummy, which is really just an extended trailer for Universal's monster mashup Dark Universe.

Cruise may be a weaselly little ferret of a mole-rat, but at least onscreen he's generally large (seeming) and in charge.  Here he's as forgettable as what's-his-face and has as much impact as a cotton ball knuckle duster.  Johnson is one of the funniest actors working today, and he looks like he's fighting Cruise, the script and Director Alex "Colonel" Kurtzman tooth and nail for every one of the three laughs he manages to get. 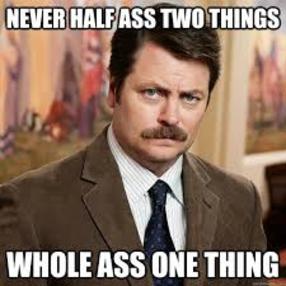