Nothing Really Happens is so scarily, scarringly bad that ol' Cinemavenger had to go and create his first ever meme.  Now, maybe, you can begin to imagine a glimmer of an inkling of a distant echo of a zygote of an idea of just how balls-in-a-blender painful Nothing Really Happens really is.

After he wrote, directed, lensed, edited, and probably catered, valeted, barista'd, and camp-followed this fucktrocity, you'd think that Justin "Lori" Petty would deserve all of the blame for Nothing Really Happens.  He's the asshole, fo' sho', but the real villains here are the twatwits at the Sci-Fi London film festival.

The only reason someone wouldn't fly right past Nothing Really Happens on Prime Video is because the plot summary - a mattress store owner's overly-normal life begins to unravel in a series of surreal incidents - is accompanied by the statement that this crime against cinemanity won Best Feature at the 2018 Sci-Fi London film festival.  Either those judges have their heads so far up their asses the stomach acid's burning their eyes, or it's all a big joke by them on the rest of us.  Either way, bollocks to you, ya filthy cunts!

Nothing Really Happens isn't "non-linear" or "paradigm-challengingly episodic;" it's just a joyless, storyless fuckstain.  It's not introspective or layered; it's a broken daisy chain of sounds and images that mean nothing, explain nothing, and add nothing to the collective consciousness.  The main character is as compelling as pasta water.  The actor playing him needs a few more acting lessons.  Like, a few more years of acting lessons.  To call the other characters - or actors for that matter - cardboard cutouts would be a compliment.

And just when you thought it couldn't get any more indie bullshit, the end credits roll at the halfway mark.  For no reason.  At all.  Which is the most annoying thing in a movie somehow constructed entirely out of annoying things and exactly the kind of thing that makes people hate the fuck out of indie films. 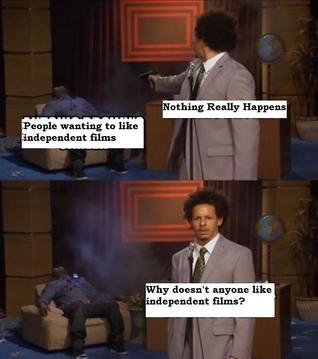